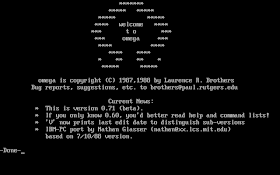 Within about 10 minutes, Omega went from being a game that I was going to blow through to get to Pool of Radiance to a serious contender for the most intriguing discovery since I started this blog.

This quasi-roguelike was written by Laurence Brothers, apparently while he was at the Rutgers University Department of Computer Science (that's where he wants me to send his check). It's "roguelike" in its basic appearance, with ASCII symbols representing the game world and its denizens, its use of upper- and lower-case keyboard commands, and its permanent death. It isn't a roguelike in its complexity. This is a game with multiple dungeons and villages, quests, guilds, shops, locked and unlocked doors, alignments, dialog with NPCs, houses you can burglarize, and a ton of other features I've barely scratched.


Where the game really won me over was the option, at the beginning, to create a character or "play yourself." This is the most original character creation process I've seen outside Ultima IV. The game proceeds to ask how many pounds you can bench press, what you got on an IQ test, what percentile you scored on graduate and undergraduate entrance exams, whether you have training in martial arts or play a field sport, whether you can dance, what your other hobbies are, whether you're "accident prone," whether you "play video games" and, if so, whether you get high scores, whether you can cut a card deck with one hand, whether you get sick frequently, whether you smoke or have high blood pressure, and a host of other questions. My favorites were: "Do animals react oddly to your presence?" and "Do you have ESP?" The game also wanted to know, for some mysterious reason, whether I'm Irish.

After you answer, the game has you sucked into your computer a la Tron: 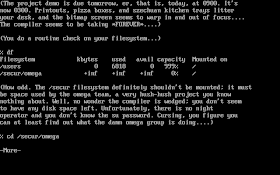 I don't want to reveal too much about myself, but suffice to say I got an intelligence of 15, a constitution of 14, strength and dexterity of 11, agility of 10 (I shouldn't have said I was "accident-prone"), and virtually no magic power--this is the first CRPG to punish me for being an atheist. Statistics matter, as I soon found out with another character:


If I had known that my first character would last only minutes, I wouldn't have spent so much time creating him, though. The game is mercilessly lethal. Within the first few hours, my handful of hapless adventurers had died by trying to crawl through a hedge, drowning while crossing a small pond, accidentally attacking a guard, rupturing a hernia while trying to lift a portcullis, starving, getting blasted by a priest the moment he walked into an abandoned temple, falling from a mountain, getting brained by a "ricochet," and half a dozen other ways. Half of the time, I'm not quite sure why I just died.


The game starts in the City of Rampart, a large town with an arena, a jail, a palace (I am told to return when I am famous), several guilds, a library, an apartment building, a casino, a Colosseum, restaurants, shops, a Department of Public Works (where you can "go on the dole" if you're poor enough), a bank, a cemetery, mansions to burglarize if you feel like it, a poorhouse where you can donate gold, and lots of other buildings I haven't explored.


My first character, Orgullous, joined a mercenary guild and got a short sword and some leather armor; entered a match at the Colosseum and defeated "Federico the pencil-necked geek," winning 50 gold; bought a suit of chain mail at a shop called Julie's; bought some fried chicken to take on the road (exploring the wilderness requires a lot of food), and got killed a few steps after he stepped outside by a storm.


My most successful adventurer, Cauthon, joined the order of paladins, who decided he was good after he donated some money to the orphanage. They gave him a spear and a horse to ride. He bought some armor at a shop, some food, and headed out. Within moments, he got stuck in a "chaos storm," which had killed one of my previous characters, but Cauthon survived it. The game told me this was a "learning experience" and advanced Cauthon several levels. A weird voice on the wind said, "The Eater of Magic can be found on an island." I wandered east, having to eat every few steps, and then suddenly, in a forest, something cast a spell that caused me to go blind and I was killed by a brigand.


Aside from the overall peril, the most difficult part of the game is the inventory, which is divided between stuff you can carry or wear and your pack. Transferring stuff around is a bit cumbersome. When you first pick up an object, it is "up in the air," and you can determine whether to put it into your pack or equip it somehow. If you put it in the pack and later want to use it, you have to first take it from the pack, after which it returns to "up in the air," and then put it in your "ready hand." This translates to about eight keyboard commands just to eat a piece of chicken. 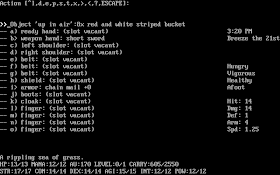 The second difficulty is that I really have no idea what to do. In my explorations of the outdoor area, I've encountered a couple of villages and a temple, but no hints as to the main quest or even side quests. The game documentation says that there are a number of ways to "win" and that consulting the oracle is a key to one of them, but I haven't found the oracle yet. Hints (but light hints) from anyone who's played the game would be welcome, 'cause I'm getting slaughtered here.

Still, I want to fully explore this one. I realize that the later versions of NetHack transcend what is normally thought of as the limitations of a "roguelike," but this is the first game that has really made me feel it's possible to create a full and interesting world without anything we'd think of as "graphics."

My new character, Steevil, is created, and I'm going to try to make it alive long enough to explore the Goblin Caves the manual insists are just south of the starting city.

I welcome all comments about the material in this blog, and I generally do not censor them. However, please follow these rules:

1. Do not link to any commercial entities, including Kickstarter campaigns, unless they're directly relevant to the material in the associated blog posting. (For instance, that GOG is selling the particular game I'm playing is relevant; that Steam is having a sale this week on other games is not.) This also includes user names that link to advertising.

2. Please avoid profanity and vulgar language. I don't want my blog flagged by too many filters. I will delete comments containing profanity on a case-by-case basis.

3. Please don't comment anonymously. It makes it impossible to tell who's who in a thread. Choose the "Name/URL" option, pick a name for yourself, and just leave the URL blank.

4. I appreciate if you use ROT13 for explicit spoilers for the current game and upcoming games. Please at least mention "ROT13" in the comment so we don't get a lot of replies saying "what is that gibberish?"

5. Comments on my blog are not a place for slurs against any race, sex, sexual orientation, nationality, religion, or mental or physical disability. I will delete these on a case-by-case basis depending on my interpretation of what constitutes a "slur."

Also, Blogger has a way of "eating" comments, so I highly recommend that you copy your words to the clipboard before submitting, just in case.

I read all comments, no matter how old the entry. So do many of my subscribers. Reader comments on "old" games continue to supplement our understanding of them. As such, all comment threads on this blog are live and active unless I specifically turn them off. There is no such thing as "necro-posting" on this blog, and thus no need to use that term.

I will delete any comments that simply point out typos. If you want to use the commenting system to alert me to them, great, I appreciate it, but there's no reason to leave such comments preserved for posterity.

I'm sorry for any difficulty commenting. I turn moderation on and off and "word verification" on and off frequently depending on the volume of spam I'm receiving. I only use either when spam gets out of control, so I appreciate your patience with both moderation tools.