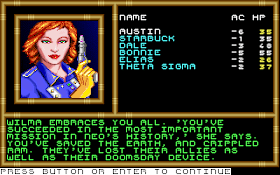 The Earth is safe but Atha the Desert Runner isn't. Such are the vagaries of life.

In my last post, I announced my intention to pursue a side-quest to rescue Atha. RAM forces apparently abducted her from Mars after my successful raid on their Mars base. They threatened her with death unless my party presented itself on a RAM asteroid. Commander Turabian forbade it, but Buck Rogers encouraged me to disobey. He didn't volunteer to come or anything. 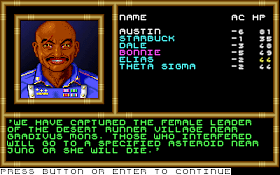 Despite the obvious trap, my party found the right asteroid and entered the RAM base. We had to fight a tough battle against a party right at the entrance. As we explored the base, a "Commander Gilbert" taunted us from a loudspeaker.

It soon became clear that we were over our heads. The battles featured multiple rocket-launcher-equipped RAM bots that took multiple reloads to luckily defeat. There were also numerous traps that damaged the party while leaving no recourse for healing. There was no way back to the ship without first conquering the base.

Ultimately, I found myself in a situation where I had low health and the only explorable avenue was a corridor blocked by an unavoidable combat with four combat bots. After 12 tries I gave up. There was just no way I was going to defeat the enemy.

Unfortunately, "giving up" wasn't that easy. I have the bad habit of just using the same save game slot over and over, and the most recent time that I'd used another was way back on Mars, before I'd finished the RAM base there. I had no choice but to suck it up, repeat those sections of Mars, and get back to Salvation base. This time, I ignored Buck Rogers's advice. RAM had a doomsday laser ready to fire on Earth, after all.

I neglected to mention it in a previous post, but journal entries had indicated that the doomsday device was composed of two parts: the laser itself and an advanced lens, constructed by the Venusian lowlanders. Scot.DOS had suggested that the lens would have to be near the sun to provide enough energy to reach Earth, so it makes sense that the working weapon would be on Mercury. 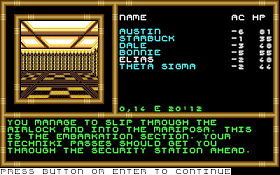 The Mercury base consisted of a large "merchants' area" at the base and then a tall tower--the "Mariposa Core"--extending upward from one of its corners. The putative ruler of the area was some lunatic calling himself the "Sun King," apparently enamored with French history. I guess RAM was just leasing space for the doomsday laser from him. To even enter the base, I needed the blue passkey from Mars. Once inside the base, I needed the "retinal lockpick" from Venus to get through one of the final doors.

Shortly after entering, I was greeted by Wilma Deering, who told me that the weapon was at the top of the Core. She gave me some advice for navigating the base, but I disregarded it almost immediately and went the opposite direction from where she had instructed. In a corridor, I met a man who challenged me with the phrase "ONE IF BY LAND...." I hadn't encountered the countersign in the game, but knowing my U.S. history, I responded "TWO IF BY SEA." The old man--whose affiliation still mystifies me--suggested I get to the core by infiltrating a parade. I took his advice and made it through the rest of the map with no encounters. This was faster, but I missed mapping most of the area.

In the lower levels of the Mariposa Core, I found three coins that were necessary to give to the Sun King for his help. An odd plot dynamic, but whatever. 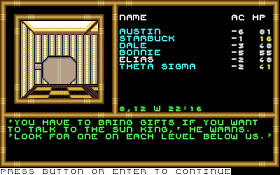 The Sun King himself was a weird character, presiding over a court of followers wearing "outlandish costumes from the French and American revolutions." He greeted me in a powdered wig, waving a French tricolour and insisted that I speak French. I'm not sure how pre-Internet youths navigated this portion if they lacked high school French. 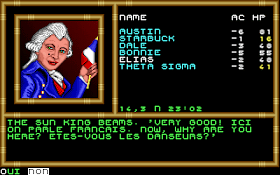 The party admitted that we weren't "the dancers," but he agreed to help us anyway. Apparently, he had grown envious of the RAM doomsday device and wanted it for himself. I took a chance and (lying) agreed to help him take control of the weapon. There was an amusing bit where the Sun King mixed up French with a bit of Spanish and Latin.

With one of the Sun King's lieutenants tailing me, I headed to the upper areas of the Core. Scot.DOS indicated I had limited amount of time before the laser fired. 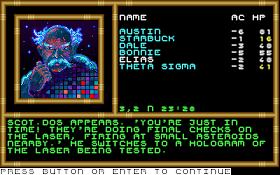 I first shut down the power to the laser so that they couldn't fire. This bought a little time but knocked out the elevators, so I had to use a back staircase to ascend. 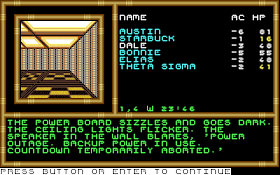 I made my way to the chamber housing the doomsday laser and activated its self-destruct mechanism. I'm not sure why RAM built such a mechanism into the device in the first place, but it sure came in handy.

Both in the room and on the way out of the room, I faced battles against RAM gennies and robots. They were reasonably difficult but not overly so--the arrangement of forces facilitated the use of explosive weapons. In general, the entire endgame was very combat-light, and there was no clear "final battle" with a boss-level foe.

When I activated the self-destruct, the Sun King's servant flipped out and ordered me to deactivate it, shrieking that the Sun King "doesn't want the doomsday device to be destroyed!" When I refused, he ran off, warning that "the wrath of the Sun King is upon you!" I thought this meant I'd face his forces on the way out of the base, but I never heard anything about it again.

The self-destruct initiated a countdown, and I had just enough time to make it to the pod bay on the level below (fortunately, I had scouted it first), hack the computer to assign my party to an escape pod, and blast my way out of the base. Behind me, the doomsday weapon blew up. 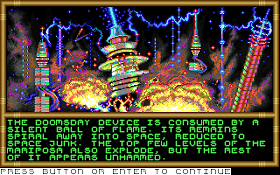 Wilma Deering picked up my pod and returned me to the ship. We returned to Salvation for a series of congratulations from Wilma, Buck, and Commander Turabian. Here's the full end-game text:

Wilma embraces you all. "You've succeeded in the most important mission in NEO's history," she says. "You've saved the Earth, and crippled RAM. They've lost their allies as well as their doomsday device. No one will be fooled into trusting them again. You are all heroes to NEO, and I hope that you'll stay with us for a long time. Your mission is over."

As you exit the airlock, you are greeted by a large mob, led by the base commander. He hushes the cheering crowd and speaks: "Welcome back You have saved Earth from the evil scourge of Holzerhein and his RAM confederates..."

Buck Rogers appears from nowhere and interrupts Turabian: "I just wanted to shake your hands and thank you for saving Earth and all her people. With people like you, RAM doesn't have a chance."

The crowd cheers and you are led to a celebration party. 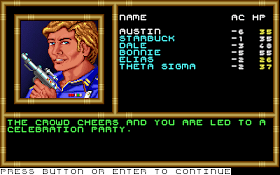 And that was it. The game let me continue to play, and I suppose I could have tried to clean up some of the side-quests. My party never did make it to Level 8, so it wouldn't have been wasted time (assuming I'll use the same party for the sequel).

I had fun scanning the adventurer's logbook to read the fake entries. There were a large number that would lead the player to think that Scot.DOS was actually a RAM spy, or even Holzerhein.DOS in disguise. Several others would have led the player to make poor choices with key NPCs. The journal was frankly showing its age in this game. So much text, including long passages, was presented on-screen that a separate journal seems superfluous.

After winning, I also consulted some external materials and discovered that Holzerhein.DOS isn't just a computer AI but rather the downloaded consciousness of Simund Holzerhein, who while living was a rich Martian. Because Holzerhein can be literally anywhere that there's a computer, he can direct much of RAM's operations personally, without the need for a lot of bureaucracy. The game was very vague about the nature of Holzerhein, but perhaps it fleshes him out in the sequel.

I welcome all comments about the material in this blog, and I generally do not censor them. However, please follow these rules:

1. Do not link to any commercial entities, including Kickstarter campaigns, unless they're directly relevant to the material in the associated blog posting. (For instance, that GOG is selling the particular game I'm playing is relevant; that Steam is having a sale this week on other games is not.) This also includes user names that link to advertising.

2. Please avoid profanity and vulgar language. I don't want my blog flagged by too many filters.

3. Please don't comment anonymously. It makes it impossible to tell who's who in a thread. Choose the "Name/URL" option, pick a name for yourself, and just leave the URL blank.

4. I appreciate if you use ROT13 for explicit spoilers for the current game and upcoming games. Please at least mention "ROT13" in the comment so we don't get a lot of replies saying "what is that gibberish?"

Also, Blogger has a way of "eating" comments, so I highly recommend that you copy your words to the clipboard before submitting, just in case.

I read all comments, no matter how old the entry. So do many of my subscribers. Reader comments on "old" games continue to supplement our understanding of them. As such, all comment threads on this blog are live and active unless I specifically turn them off. There is no such thing as "necro-posting" on this blog, and thus no need to use that term.

As of January 2019, I will be deleting any comments that simply point out typos. If you want to use the commenting system to alert me to them, great, I appreciate it, but there's no reason to leave such comments preserved for posterity.

I'm sorry for any difficulty commenting. I turn moderation on and off and "word verification" on and off frequently depending on the volume of spam I'm receiving. I only use either when spam gets out of control, so I appreciate your patience with both moderation tools.